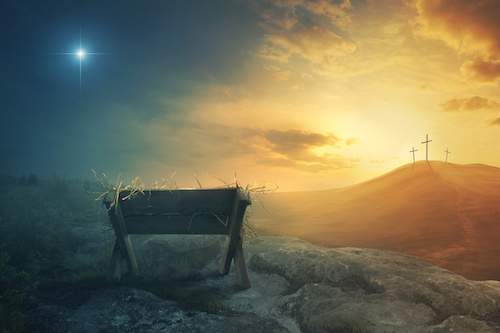 Who, being in very nature God, did not consider equality with God something to be grasped, but made himself nothing, taking the very nature of a servant, being made in humans likeness. And being found in appearance as a man, he humbled himself and became obedient to death – even death on a cross.”

Have you ever heard someone say, ‘I feel as helpless as a baby’? In him or herself, a baby is completely helpless. They depend on another to feed and clothe them, to carry and hold them. Apart from someone to care for them, they would perish.

I suppose that is what truly strikes me as I look into the manger. Now, many find it no problem at this time of year to look into the manger, since babies are so cute and cuddly. They would much rather look at a helpless baby in his mother’s arms, than at a bloody and beaten Saviour, hanging on a tree. Much more palatable to one’s liking.

The cross draws me to stare in amazement at the love of our Lord, however, the manger has its own draw for me. Having birthed and raised five babies of my own, I know the helplessness of that wee human, who was born in a stable so long ago. I cannot help but weep in gratitude to my God, who would humble himself in such a manner.

Why would the God of the universe who created us and everything around us, become one of us? And why a baby? Why someone so helpless?
I can’t say that I understand the complexity of it, but what I find to be true, is that ‘God so loved the word, that He gave His Son”. (John 3:16) He gave Him.

When I look at my five sons, the depth of that statement draws me like no other. He gave Him. For us. And this tiny baby, so helpless in himself, demonstrated as ‘He grew in wisdom and stature and favour with God and man’, that He was totally dependent on His Father God, teaching that He did nothing apart from His Father’s will. (John 5:19)

What a wonderful gift His example gives us this Christmas as we stare into the manger. Dependence on the Father. From cradle to cross, doing only according to our Father’s will. Total dependence, which leads to total peace. From cradle to grave, we are His, our Lord and Saviour Jesus Christ.

Oh come, let us adore Him, Christ the Lord!
Merry Christmas, everyone!!!