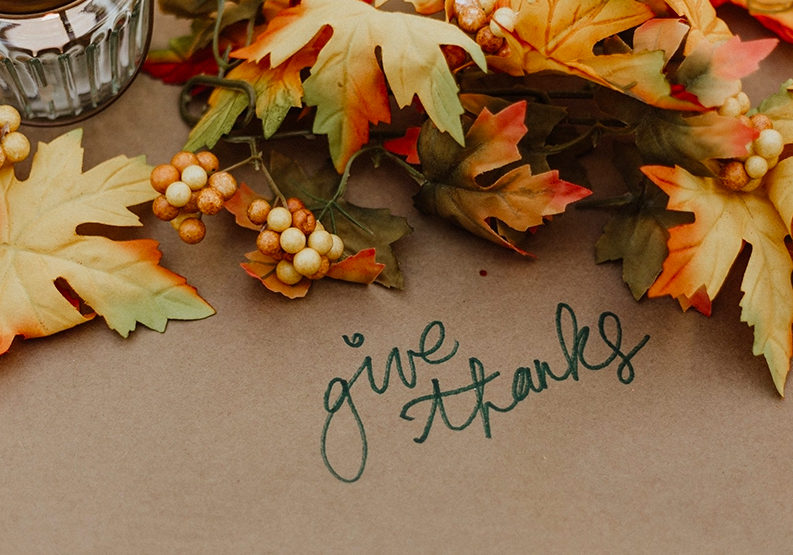 “Taking the five loaves and the two fish and looking up to heaven, he gave thanks and broke the loaves.”

It has become a common practice in society today, to encourage people to keep a thankfulness journal, as a means of calming our mental state by looking outward to the good things that we can appreciate in our lives. I like that. Thankfulness is one of those emotions that encourages the emphasis and focus to be on the good things rather than the negatives in life. It is a practice that our family, along with countless others do, as we sit around our table at Thanksgiving time…telling of all the good things that have transpired over the previous year, for which we are so grateful.

One of my favourite miracles that Jesus performed during his time of ministry, was the feeding of the five thousand with five loaves of bread and two fish. The simplicity of His actions was something that His disciples had seen many times before. In Matthew’s gospel, we are told that He looked up to heaven, gave thanks, and broke the loaves. No fanfare. No exhibition of power. He simply gave thanks.

After Jesus’ death and resurrection, as two of his followers were walking along the road to Emmaus, feeling quite dejected after the loss of their Lord, a man came along the roadway and began walking with them. They talked about the sad happenings of the previous week with him, and when they arrived at their destination, they urged the stranger to stay, rest, and have a meal with them. Although they had spent many hours walking with him and listening to him expound on the Scriptures, these disciples did not recognize him, until they were at the dinner table together. We are told that when Jesus took the bread, gave thanks, broke it, and began to pass it to them, their eyes were opened and they recognized him.

This account has always drawn me. Why then? Why when he gave thanks? Had they witnessed him giving thanks so many times before, that the very simplicity of his prayer was as familiar to them as breathing?

As followers of Christ, may we be ever aware of the simplicity of a thankful heart. May it be like breathing to us. It has been a difficult season world wide. As we are beginning to emerge from this world wide pandemic, which has altered our lives for a few years, we are now facing threatening news whenever we turn on our televisions or our devices. It has the potential of robbing one of peace and of hope. But then I think of those two men, walking along the road to Emmaus, feeling totally defeated. The One they had put their faith in had died. Their future seemed bleak and without any hope at all, and yet their Saviour had been walking along beside them the whole time, and they were unaware.

There are many who feel that way now…a fearful hopelessness that they cannot see a way out of. Now more than ever is a time to simply give thanks, and to remember that our Saviour is walking alongside us, as well. This Thanksgiving as we sit around our tables, may we, with thankful hearts, look up, give thanks, and break bread together!